We want to thank guest blogger, Ted Kelch, for sharing his running story with you all. This is a person who started and got hooked to running after a 5K race just two years ago. Since then, he learned about all the “crazies” running ultra distances and now wants to pursue it. He is planning to run our CiJ 12-Hour as a training run for the DPRT 50 Mile in October. We wish him the best of luck on his journey to 50 Miles. Here is his story… 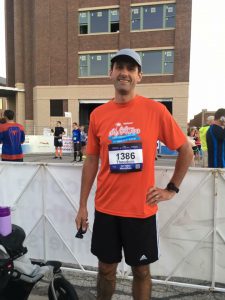 The Christmas in July 12 hour race is going to be my first of two ultra events I’m signed up for this year and I can’t wait. I started running a little over 2 years ago and have wanted to do an ultra distance since I heard that people were crazy enough to run that far. When I first got started I could barely run a quarter mile without stopping for a walk break. After the first time I ran a 5k I was hooked. I progressed through a couple 5ks to the Morton Arboretum 10k. The first time I had run over 5 miles was a week before the 10k. My goal was to beat 1 hour and I felt like I was going to die while running it, but felt great after it was over. My 10k PR is now down to 46:09. The same kind of thing happened with the half marathon distance. I set out to run a sub 2 at the 2015 Mad to the Bone race in Batavia. I was so close to throwing up to get to 1:55:59 and now I can run that in training without breathing too hard at all.

I had my first running injury in 2015, a case of plantar fasciitis I think was caused by over training and increasing distance too fast. I was training for my first marathon and was also obsessed with getting my 5k time under 20 minutes. I shouldn’t have been working on both at once and I hurt myself. I was too in love with running and was already signed up for the Des Plaines River Trail marathon and running with shoe inserts to keep the pain in my feet under control during training and the race. I was really unprepared for the pain after 20 miles as I had only run one 20 miler before the race. By the end of the race I could barely walk and my feet were so swollen that my shoes were starting to split.

I started out 2016 by running the Sly Fox half and then the Morton Arboretum run back to back and I felt better than ever. I set out on a goal to run 1000 miles in 2016 and do two full marathons, the Fox Valley and Naperville. I overshot my goal of 1000 by 278 miles. I had one terrible marathon at Fox Valley. I loved the course but decided to rely just on the Gatorade and race supplied gels, which was a terrible mistake. At about 16 miles in I felt like a kid that had eaten too much cake. I was sick and ended up pretty much walking the rest of the course. I had my eyes set on the Naperville marathon several weeks later because I wanted to Chicagoland distance challenge medal; I like shiny things. I went out hard in training and only took a couple days off after Fox Valley. My IT band was terrible and all the foam rolling and exercises wouldn’t make it any better. I spend the 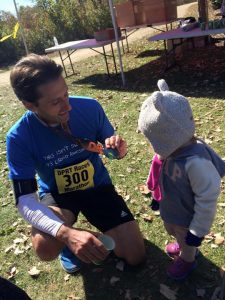 time between marathons not running more than 3 miles without stopping to walk or quit. Sometimes the pain in my knee was so bad I would get home after a run and fall down on the stairs trying to go up to shower. I was really worried about Naperville and was 90% sure I wouldn’t even finish.  I wrapped my knee with some IT band strap I found on amazon and hoped for the best. By the time I got to the 10k mark and still running I figured it might end up going okay. I was using nothing but Tailwind as nutrition and ignoring the Gatorade and gels. I ended up finishing and getting a PR; I could also walk the next day.

My plan is that 2017 is going to be the year of stretching myself to bigger goals. I’m starting the year at the Biltmore Estate backyard to vineyard challenge. It’s a half on March 11th and a full on March 12th entirely run on the Biltmore estate in North Carolina. When I signed up for these races I knew it would be a challenge training for this through the winter and I’m lucky this winter has been so mild. On the days that the sidewalks and trails are too icy I settle for the ⅛ mile track at the gym or the treadmill. Most of my outdoor training is done on the prairie path or local forest preserves. My favorite place to run is out to and around is Herrick Lake that is about a 4 mile run from my house. There are lots of paths to run out there and it is fairly empty most of the times i’m running, especially on the farther out loops.

I plan on doing the Des Plaines River Trail 50 this year in October and I’m using the Christmas in July 12 hour as a test run for it since I’m nervous about finishing the DPR race in the cut off time, which I believe is 11.5 hours. The Christmas in July race seem like a very welcoming, friendly and well supported race by everything I’ve seen on social media. I love that I’ll be running all night which is going to be a challenge since I’m normally in bed by 9. It’s also close to my hometown of Wheaton and I actually work for the Invisible Fence of Chicagoland office located just across the park from where the race is held. Maybe some of my four legged and two legged co-workers will come to cheer me on! My goal is to go at least 50 miles in the 12 hours with a race strategy of starting out slow, keep moving forward no matter what, have fun and not die.