R4W: How long have you been running and what got you into it?
David: 9 years – saw my parents aging due to inactivity and did not want to follow that model. Also, wanted to avoid a daily medicine regime for heart/blood pressure/diabetes. (Success, btw as I near my 60th year of life.)

R4W: How do you stay motivated when you don’t want to run?
David: Not sure anymore – inner drive? My friends waiting for me at our next run is a strong one.

R4W: What has been the funniest thing that has happened to you preparing for, during, or after a run?
David: Running a 20 miler, and just a mile in, a woman reaching her hand into her running shorts and loudly exclaiming “I wore the wrong damn thong!” and “Damn thong is crawling up my crotch!” (as she is full on readjusting on the run) and lastly about another 1/2 mile down the trail “This f’in thong is going to wear off my c#$t!” She had headphones on, so I’m not sure she realized how loud she was. I was rather amazed how well she could run with her hand in those tight shorts rearranging. There were only two of us guys and a group of women in our wave of runners. No one said anything, but the looks exchanged were something else! I believe one of the looks from a woman was the “I’m having the same problem.” look. 🙂 After we separated from the thong wearing, the discuss that ensued was rather lively! Sure made the first 7-8 miles of that 20 really fly by!

R4W: What do you think about when you’re alone on your run?
David: Pretty scattered – loved ones lost, Navy adventures, where is the closest beer stand, is that a skunk ahead?, Wish I was done, faster, done, stronger, done, younger, done,… (then when I’m done wish I went a little further), work, where is the next available beer, I have to go to the bathroom, did I lock my car?, did I register for CIJ?, why did I register for CIJ? family, sleep, … 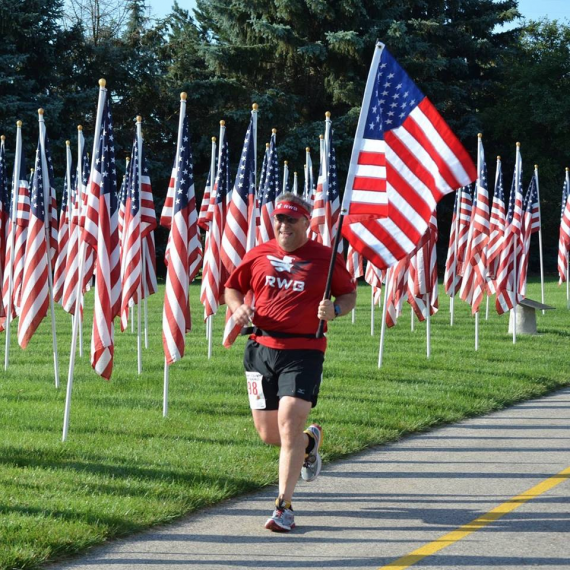 We asked runners 5 questions in hopes to learn more about their story and in turn help to inspire others. If this sounds like something you would like to be a part of, please reach out to us at info@runners4wellness.com.