R4W: How long have you been running and what got you into it?
Bob: I’ve been running off and on for ~6 years. I got into it as a way to get back into shape after putting on a few pounds. At first I was only going a mile or two at a time but quickly found that I enjoyed it and ended up signing up for a marathon about 6 months after I started.

R4W: How do you stay motivated when you don’t want to run?
Bob: I like to keep a big race on my horizon to remind me that if I slack off I’ll be unprepared to complete the distance. This hasn’t always worked. I have stayed home from big races more than once because I didn’t do the training I needed to in order to have fun at the race. Now my biggest motivator is my daughter. I want her to see me committing to and following through on big things so she can learn to do the same when she gets older.

R4W: What animal would best describe your running form?
Bob: I’ve let myself go a bit, so right now my running form resembles something like what you’d get if a bear and a tortoise were able to reproduce. I hope to more antelope-like by the time Christmas in July starts in 2019.

R4W: What has been the funniest thing that has happened to you preparing for, during, or after a run?
Bob: One night I was drinking with some non-running friends and the subject of running came up. I was talking about how much better my life had been after I started running – more energy, general happiness, pride in setting and accomplishing goals, etc… One of my friends said he thought he was going to give it a try some time. A few drinks later everybody was pretty sloshed. We decided at that point that there’s no time like the present and that we were going for a run. No-one had running shorts or shoes, so three of us did ~2 miles through the neighborhood in the rain, barefoot, in our boxer shorts. Being the in-running-shape one, I brought two beers with me to “level the playing field.” Good thing none of the neighbors called the cops.

R4W: What do you think about when you’re alone on your run?
Bob: Breakfast. 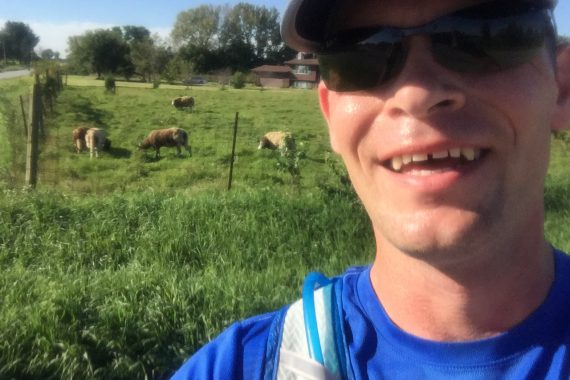